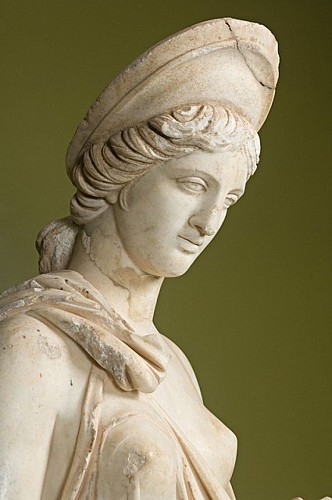 Statues in the Basin

Like many other buildings in Sagalassos, the Antonine Nymphaeum is sumptuously decorated. In the Roman Empire, elaborate decoration was first used on buildings in the time of Emperor Augustus, when it was used to symbolize the golden age that begun with his reign.

The main decorative themes in this fountain refer to water and the god Dionysos, as suggested by the theatre masks, grapes and intoxicating plants. The two larger-than-life statues of the drunken Dionysos supported by a Satyr were very expensive sculptures from the city of Aphrodisias. These two statues are the only ones original to the fountain.

The other statues that archaeologists discovered in the basin originally stood elsewhere and were added to the fountain in the 4th and the 5th century AD. They represent Nemesis, Apollo, Asklepios and Koronis. All of the statues except Nemesis were broken and thrown in the basin by Christians. The statue of Nemesis was damaged during the earthquake of 600-620 AD. The original statues are displayed in the Museum of Burdur; the statues exhibited here are copies