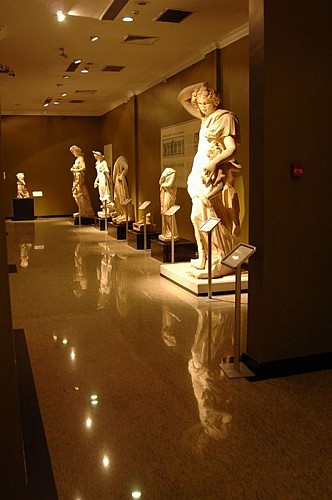 THE MUSEUM OF BURDUR

The museum houses one of the richest collections of Turkey (about 60, 000 pieces) including rare pieces of archaeological material. It displays a continuous 9000 years of Anatolian civilizations.

The museum was the runner-up of the 2008 European Museum of the Year Awards (EMYA).

The province of Burdur has some of the most important prehistoric sites like Hacılar Höyük and Kuruçay Höyük as well as Roman cities like Sagalassos, Kremna and Kibyra. Thanks to the excavations, visitors can follow the history of the region through archaeological material representing a wide time span from the Neolithic to the Roman periods.

The first floor is dedicated to pieces from sites shedding light to Anatolian prehistory.

The ground floor displays in part some important statuary and reliefs from Kremna and Kibyra. The main part of this floor is spared for many wonderful statues, reliefs and small finds from Sagalassos.

Among them you can enjoy the colossal statue heads of Hadrian and Marcus Aurelius, and their marvelous legs and feet. These statues of the Roman Emperors were discovered in the Roman Baths of Sagalassos.

They are considered amongst the statues of these emperors with best workmanship and state of preservation.

The parts of the Hadrian statue was exhibited on loan in the British Museum in 2008.

Both were also part of the temporary Sagalassos Exhibition that took place in 2012, in the Gallo Romeins Museum of Tongeren/Belgium which attracted 149 000 visitors in 7 months.