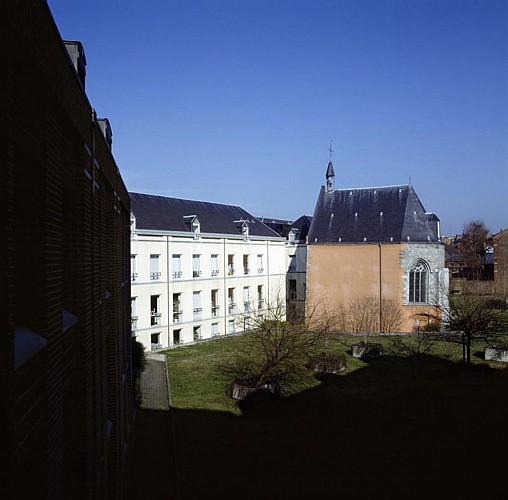 Chapel of the former hospice of Cantimpret

This chapel is the last vestige of the Beguine convent of Cantimpret, founded in 1248 by Marguerite de Constantinople, countess of Flanders and Hainaut from 1244 to 1280. Built in Hainaut Gothic in limestone, brick and stone in the middle of the 16th century, the chapel has a three-bay nave followed by a three-sided chevet. It has a slate roof topped by a pinnacle. The façade rises over two levels delineated by a dripstone course and features a doorway that has abutments with columns and an ogee lintel. Both the façade and the other walls have windows with flamboyant tracery and mullions. Inside, vaults on ogee crossbeams and intersecting bracing fade into cavetto mouldings.

The chapel was restored between 1997 and 1999, although it was not allocated any special purpose. A second design and works phase from 2004 to 2007 enabled the old chapel to be converted into an exhibition, reading and meeting space, in particular to host meetings of the Provincial Chamber of the Royal Commission for Monuments, Sites and Excavations, or for the nearby public services. Operating in this way, the chapel has been integrated into the buildings at the Grand Hospice which houses the external services for Hainaut I of the Directorate General for Planning, Housing, Heritage and Energy.