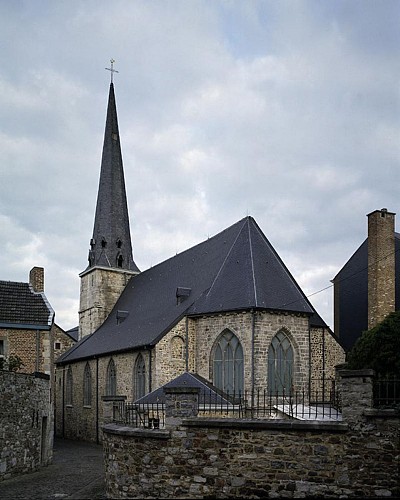 Now disused, this Gothic building in Meuse limestone and sandstone blocks built on the site of an earlier sanctuary dates to a large extent from the second half of the 15th century, as has been confirmed from dating the frame of the tower. The tower itself has a tall octagonal spire and three irregular naves of four bays and a three-sided chancel adjacent to a sacristy from the second half of the 18th century and a walled graveyard, also disused. Detached in 1897 from the houses flanking it, the church was restored at the beginning of the 20th century under the supervision of L. Schoenmaeckers who took the opportunity to modify the windows in the side aisles.

A Gothic gate featuring fine moulding decorated with rosettes in relief and resting on polygonal bases provides access to the building. Above the gate is a wide Gothic window, positioned slightly off-centre. Disregarding the neo-Gothic alterations, all of the windows are treated in the same style. One noteworthy element is the way the interior of the building is punctuated by columns with capitals featuring highly stylised leaves. The floor is dotted with numerous funerary tombstones, which bear witness to the preference of the wealthy people of Huy for this church, which housed the the sepulchre and then the cenotaph of St Mengold. The furnishings consist essentially of pieces from the 18th century, some of which are preserved in the Treasury of the collegiate church.