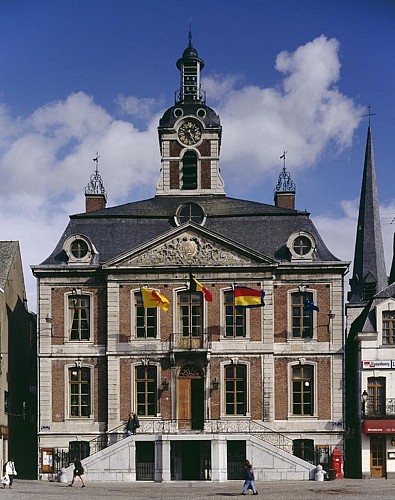 This 1765 building by Jean-Gilles Jacob in the style of Dewez, replaced the old grain hall. With its overall appearance - symmetry and monumental staircase - it is representative of its type in the Liège region. The building is on three levels and has a projection to the front topped by a pediment. The ground floor, which acts as a base to the building, is located behind a staircase with a twin flight of steps and elegant handrail. The upper levels make extensive use of brick and stone and are lit by large windows with decreasing heights. The main entrance, which its Roman arch, has a rocaille-style keystone. Lit by three very similar windows, the floor has a balcony resting on sculpted consoles and adorned by an elegant railing. The pediment of the front section of the building, dated 1766, provides a fine example of stonework around the town's coat of arms, which replaced that of the prince bishop beaten in the Revolution. The façade to the rear, like the gables, is far more plain and is partly concealed by an annexe built at the beginning of the 20th century. The whole building has a mansard roof with dormer windows, above which is a bell tower. Featuring a dome, it is reminiscent of the old bell tower and houses the clock, bells and the clock movement. Of the 37 bells, two dating from 1406 come from the old bell tower, while the others have been recast from this same group of bells. A monumental staircase with balusters enhances the decoration of the interior, which is otherwise relatively unassuming.