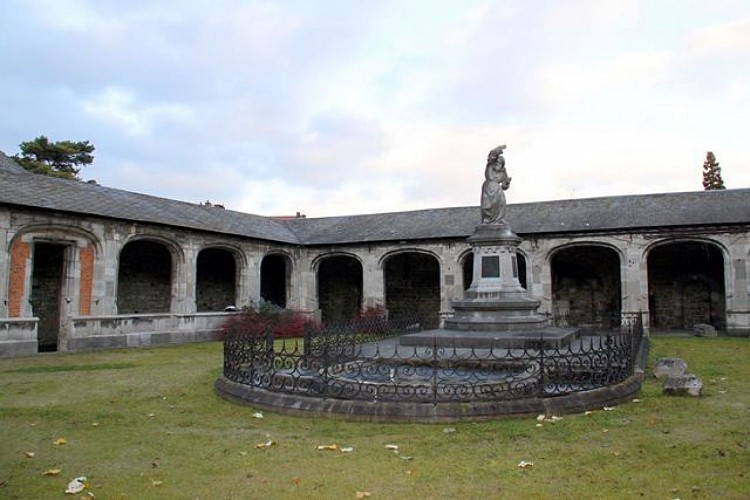 This abbey takes its name from an area where a community became established in around 1100, alongside the Meuse. A priory until 1208, the abbey is said to have been founded by Peter the Hermit on his return from the Holy Land. Designed to be four-sided, it was enclosed to the south by the church in a Latin cross with a crypt that was rebuilt in the 16th century and, to the north, by the abbot's house dating from the 18th century. Sold as a national asset, it was cut off from the church and its south-west wing. In 1854, the abbot's house, then owned by the town, was converted into a château by the architects Vierset-Godin.

All that remain now are the two wings of the Gothic arched cloister, surbased and moulded, separated by pillars with prismatic bases. Built in bonded limestone and rubble blocks, they were restored in 1939 after the vaults collapsed in 1925. The gallery of the cloister is accessed through a door added later in the north wing. One of the doors in the rear wall, with a Renaissance surround, was to provide access to the abbey church.

A statue of Peter the Hermit stands in the courtyard. Raised on the initiative of Charles Godin, who was the owner at the time, this work by the sculptor Halleux was inaugurated in 1858.

A section of the Romanesque façade from the 13th century has also been reconstituted not far away. It was located in rue du Vieux Port and now only has part of one door with a trilobe lintel, emphasised by a moulded surround, as is the case for the half-moon window adjacent to it.