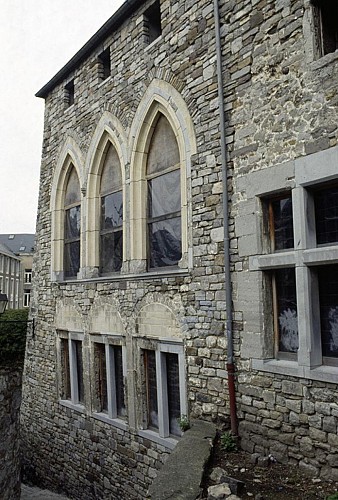 Maison Legrand or "House close to the Tower" in memory of the bell tower that used to dominate the road, is situated on the corner of the ruelle de la Cloche. It is part of a residential area of the 13th and 14th centuries that was redeveloped from the 17th to 19th centuries. The house is made up of an L-shaped building with a low-set wing running at right angles, both built from rubble blocks. It is noteworthy for the remains of a Gothic façade that has been altered, consisting of three bays rising to two and a half storeys. This 14th century façade is between two structures from the 13th century, all of which remain are the frames of three arched windows. The ground floor of the Gothic façade had mullioned windows under a sparing arch, now walled up, and on the first floor, three crown windows that were partly walled up in the 18th century before being opened up again in the 19th century by two rows of quadrangular windows set one above the other, similar to and from the same period as the windows on the upper floor. Originally, the interior of the main wing consisted of two huge rooms, one above the other, rising to 4.50 metres in height. The structure of their floors has been dated by dendrochronology to around 1315.