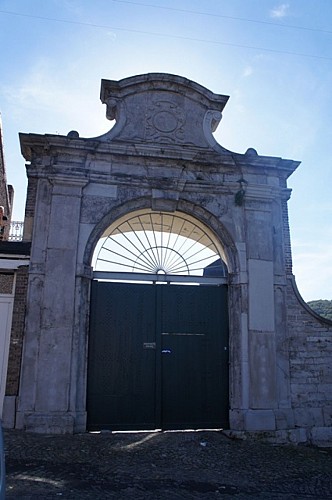 Former convent of the Croisiers

This former convent flanks rue des Larrons, which used to lead the way up the hill of La Sarte to the gallows. The enclosed land at the top of the road was used to train crossbowmen, hence the name Coteau des Albastries.

Of the monastery founded in 1233-1234 and the main house of the order, only a few buildings escaped the Revolution. These were the porch and the old brewery. Access to the monastery was through a doorway with a Roman arch dated 1742. It is flanked by Tuscan pilasters supporting an entablature on which rests a curved pediment with consoles. The hammered coat of arms of the head of the order in place at the time of construction is set off in a rocaille-style surround topped by a crown.

The old brewery from the end of the 17th century is over two levels, each decreasing in height, with a base built from whitewashed brick, blocks and limestone and with horizontal bands. The windows, which are more asymmetrical on the left-hand side of the façade, set back, have been altered over time. The whole building has a mansard roof. The main feature of the interior is an 18th century neoclassical staircase.

A bonded wall and quadrangular blocks enclosed the convent. The wall is adorned in places by shields or niches.

Building (with protection zone) listed on 13th May 1998 (porch, brewery and communal wall)