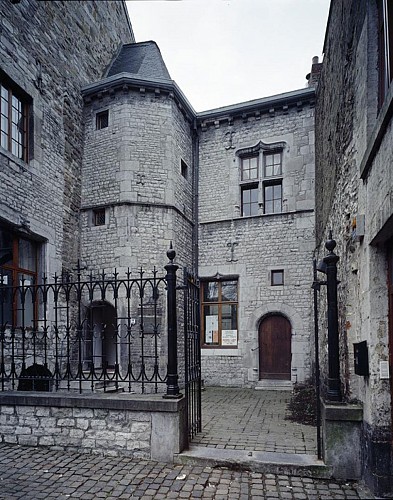 Known incorrectly as the former grain hall, this L-shaped group of buildings encloses a cobblestone courtyard with gate. Its current appearance dates from the 16th century when a building dating back probably to the 13th century and possibly before was converted and a stair tower and additional wing added.

The wing on the left on the side facing the square shows an arrangement dictated by the earlier buildings: ground floor with no windows and first floor lit mainly by three adjoining windows with Gothic arch, long since bricked up. Partially hidden by 20th century buildings, the wide side wall shows signs of numerous alterations, as does the whole of the wing. These changes relate mainly to the windows, one of which features a window seat inside.

The second wing of the building, constructed later, features a door with a moulded surround resting on fillets in the shape of column bases. The upper level retains a fine example of a 16th century window with ogee lintel in relief - a motif also found on the ground floor - resting on human faces. A polygonal stair tower, also accessed through a door with moulded surround, provides the link between the two wings.

The rear façade used to face an interior courtyard, which has been converted into an exhibition room with a light roof. Finished in a white coating, the ground floor has been altered several times, leaving the 16th century upper level built to connect the wings relatively intact. However, as on the wall facing the square, a number of sculpted elements have disappeared.