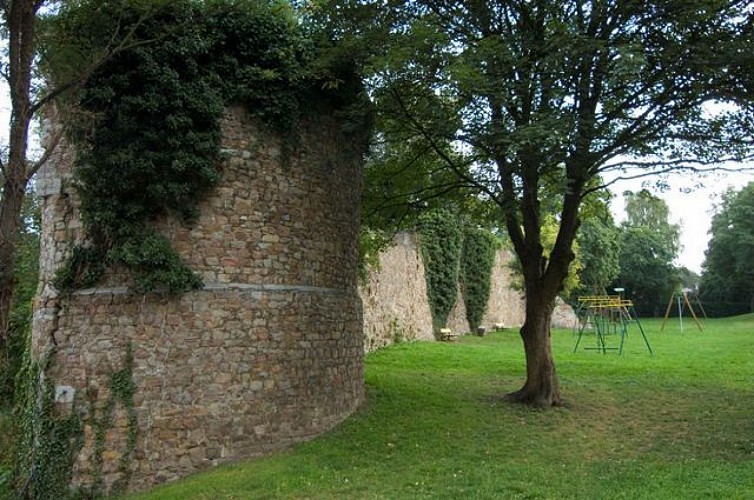 The fortified remains that can still be seen in the Huy landscape belong to a city wall built in limestone blocks from the end of the 12th century. Although the gates and many of the wall's elevations disappeared during the 19th century, the line of the wall is still relatively easy to follow along the sections that have been preserved. While the rue des Remparts retains significant parts of the fortifications with its two towers linked by a joining wall, the line of the city wall itself can still be seen running parallel to rue du Marché, behind 11 rue des Larrons, in the garden of 11 rue des Croisiers close to place Saint-Denis, to the rear of rue des Crépalles (where a fine section of the fortifications can also be seen), in rue Saint-Domitien, along Gabelle hill, in the garden of 4 avenue du Hoyoux (where the remains were altered in the 19th century to add battlements beloved by the neo-medieval style), as well as in the grounds of 17 rue Saint-Pierre. The remains are more scarce on the other side of the Meuse, except perhaps in rue de la Couronne. These fortifications have evolved over time, particularly in the 13th and 14th centuries. The later remains differs by the significant use of limestone and the internal dimensions of the towers. These elements can be seen parallel to rue Entre-Deux-Portes and at 17 rue Saint-Pierre.