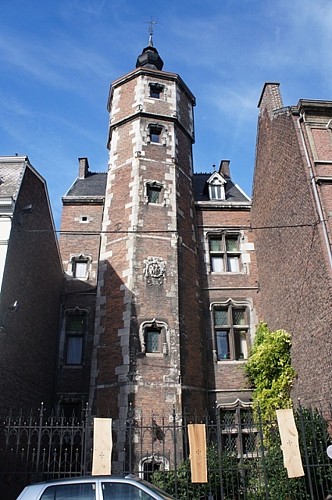 This tower is the final vestige of the private townhouse of the counts of Oultremont, pulled down in the latter years of the 19th century to accommodate major roadworks. The result of this partial demolition was to bring about the replacement of some materials and modifications to the windows. The tower with its five bays has since adjoined a building dating from the end of the 19th century.

The tower consists of an offset base and several levels of brick and limestone marked by horizontal bands under an onion-shaped roof atop the upper floor, which juts out a little. A flagstone with the coat of the arms of the d'Oultremonts adorns the main façade, above a cartouche indicating the date of 1559. The number of windows varies from one wall to the other and features Gothic modenature with an ogee lintel. These modenatures also flank the openings of the three-story building attached to the tower. In this case, they are worked in great detail and feature motifs with human heads. The entrance door and dormer window that occupy the slate roof are copies of models from the 16th century.