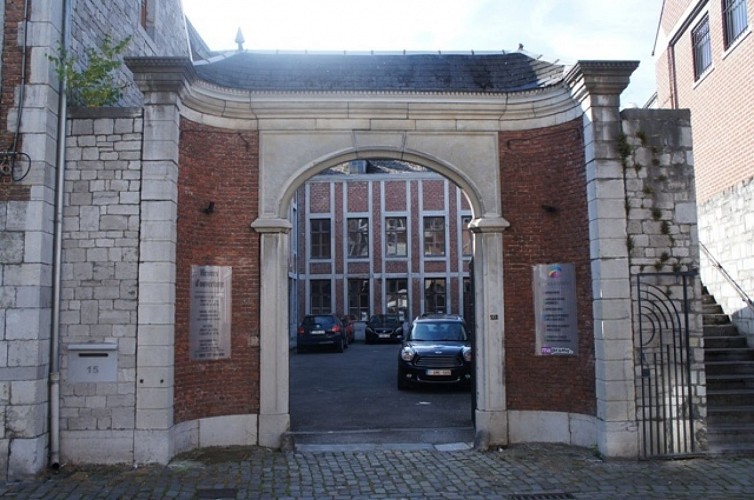 A gate with concave reveal and cross wall pilasters under capitals, built from brick and limestone, provides access to an interior courtyard edges with wings at this imposing townhouse from the second half of the 18th century (1776). Constructed in an L-shape, the building has a low bonded base wall. The main façade rises above this low wall with alternating brick and limestone emphasising the architectural elements. Frames with chamfered corners punctuate the succession of nine bays on the ground floor and seven on the first level, where two bay windows have been replaced with panel adorned with limestone. The doors and bay windows have retained all their neoclassical joinery, featuring frames with fluted uprights, sculpted with ova, grooves and roses, etc. A mansard roof with three dormer windows caps this main façade. Compared with this, the rear wing is much more sober and lacks the limestone decoration of the main frontage. The internal furnishings feature a rocaille-neoclassical transition staircase, as well as neoclassical fireplaces topped with stucco or wooden decorations sculpted in the rocaille style. The junction between the two wings is occupied by a solid wall of brick set back. This structure, visible on four levels (rue des Coucous), dates from the second half of the 17th century, and hence predates the wings that partially surround it by a century.