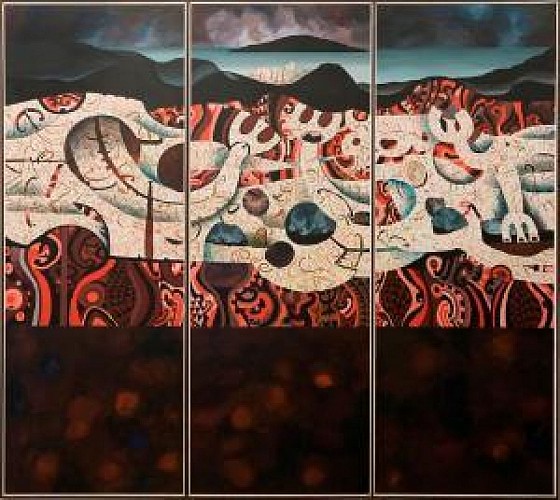 When Maori-Chinese artist Buck Nin died aged only 54, the high-ranked turnout of representatives from many tribes, along with a who’s who of the contemporary Maori art movement, was testament to the larger-than-life presence Nin had established in the community. Renowned as an artist, entrepreneur and teacher, he was not only among the first generation of Maori artists to make their mark on the Western world of contemporary art; he actively nurtured the talent of many who followed.

An important experience for Nin’s artistic practice was the restoration of the historic Rangopai marae near Gisborne in 1976-77, which was renowned for its characteristic mixture of post-colonial motifs and painted designs. Nin’s response was a triptych series that totalled 20 panels of metaphysical landscapes that seethed with fluorescent renditions of traditional motifs. Layered like the carvings on a canoe prow and shown thrusting through the land, these visual motifs are also seen in this painted triptych Rangitoto, from 1984. Commissioned by fellow artist Pat Hanly for the new Commerce C building at The University of Auckland, Rangitoto is similarly composed by weaving a mass of ancestral roots that are seen to energise and anchor Auckland’s hilly, volcanic terrain.