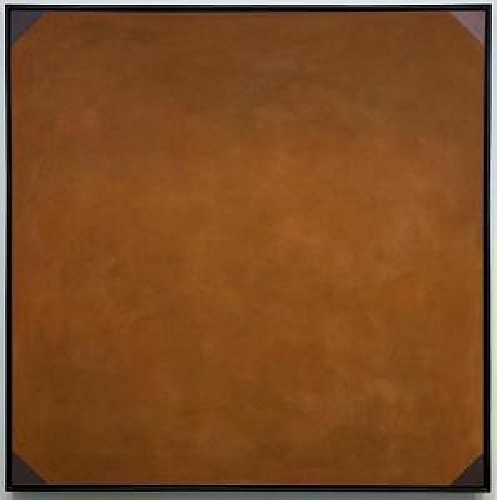 Credited as having painted New Zealand’s first abstract painting in 1946, Milan Mrkusich has maintained a consistently abstract method ever since. The present work Painting (Ochre) is from Mrkusich’s iconic corner series, which are all typically square and symmetrical in form, with a black triangle in each of the four corners, reminiscent of the devices used to anchor old snaps in photo albums. Worked in acrylic paint with a small brush to create variations in texture known as scumbling, The University of Auckland acquired this Mrkusich masterpiece shortly after it was painted in 1974.

Mrkusich has described the symmetry of his Corner paintings as “Jungian and symbolic of the Four”, referring to Jung’s four states of consciousness. The square format of these works relates to Rudolf Koch’s Book of Signs, where the square is “the emblem of the world and nature” and the “Christian emblem of worldliness symbolised by the number four: the four elements, the four corners of the heavens, the four Evangelists, the four rivers of Paradise.”