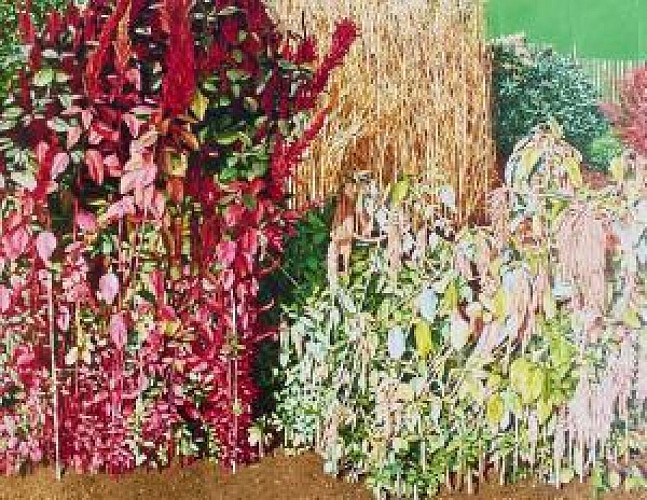 Karl Maughan’s gardening parents appear to be the source of his choice of floral subjects, although his luxuriant canvases are more concerned with the expression of light and colour than with the flowers themselves. In 2011 Maughan’s signature floral compositions left the two-dimensional world of painting in a collaborative effort with the hugely popular New Zealand designers, Stolen Girlfriends Club. The signature print from their summer range was the result of that pairing: a vivid, kaleidoscopic garden in characteristic Maughan style that has come to grace the body of many a local fashionista.

Maughan has been painting gardens for the past 20 years and shows no sign of changing his subject matter. Living in London for a decade from 1994 gave Maughan easy access to the Royal Botanic Gardens at Kew – the subject of this current work – where the largest living plant collection in the world is housed. Originally Maughan set his easel up outdoors, but now uses photographs so that he can manipulate light, colour and perspective. Up close, his brushstrokes separate out in the manner of Impressionist painters such as Monet and Seurat, but from a distance they blend together to create a hyper-real effect.