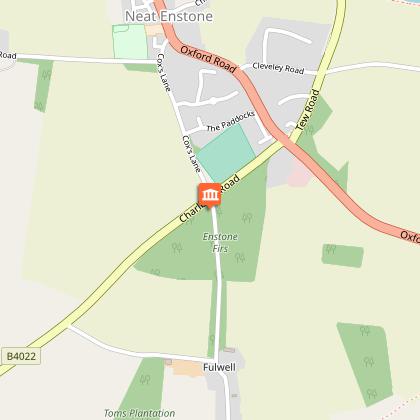 The Hoar Stone at Enstone is a monument of the type called a portal dolmen. Portal dolmens are funerary and ceremonial monuments of the Early and Middle Neolithic period, the dated examples showing construction in the period 3500- 2600 BC.  As burial monuments of Britain’s early farming communities, they are among the oldest visible field monuments to survive in the present landscape.

Before the inclosure of the open fields and downland above the village in 1844 theHoar Stone ‘stood like a beacon on the hills’, but it is now hidden in a plantation at the crossroads above the village.

As with many such sites, several stories exist about the stones.

The stones are known to go down to the river (the Glyme) to drink when the Lidstone church clock strikes 12. Lidstone has no striking clock.

If moved from their location, the stones will return of their own accord.

The stones are said to be a monument to General Hoar – the large stone is known as ‘the Soldier’ or the ‘the General’.

The Hoar Stone on the Modern Antiquarian

The Hoar Stone on the Megalithic Portal

The Hoar Stone on StoneCircles.org.uk

Enstone on a Vision of Britain