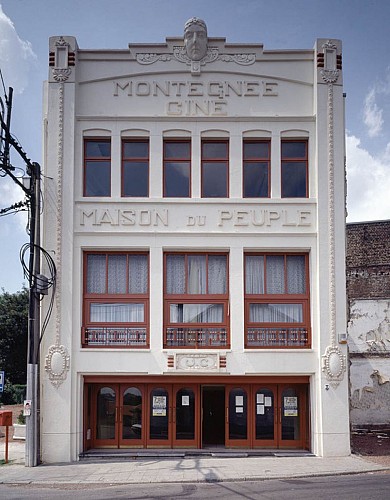 The house of the people at Montegnée was built by the architect Joseph Moutschen at the request of the "L’Avenir montagnard" cooperative company, which joined the ranks of the "Union coopérative de Liège" after the First World War.

Standing on its own today following the demolition of the adjoining houses, the building features an Art Deco façade. Built in brick masonry, the house has been painted mainly in white with some detailing in red. Framed by two pilasters decorated with a garland with the ends defined by medallions, the façade rises to three levels. At the top is a stair pediment, the top of which is occupied by a mask with feminine features.

Inscriptions in relief are still visible, reiterating the purpose of the location "Montegnée Ciné", "Maison du Peuple" and "UC", for Union Coopérative. These initials appear for the first time in a rectangular frame containing a scrolled medallion, then for a second time in a more geometric frieze.

The building was purchased in 1977 by the local council and houses a reception room.