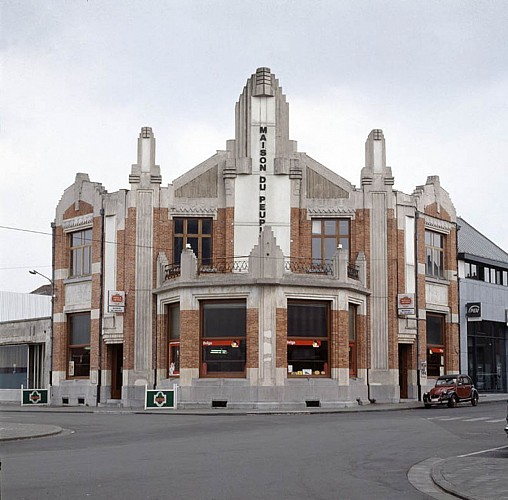 The house of the people in Dour

The house of the people in Dour, which is still used as such, was built by the architect Alphonse Van Craenenbroeck in 1928-1929, commissioned by the "Les Socialistes Réunis" cooperative company. The wish of the company was to provide a modern place for people to meet, where the recreational and festive side could take precedence over the commercial side.

The building seeks to express the leadership role played by the cooperative. Making beautiful use of the language of Art Deco, the building is designed according to a triangular plan with a semi-octagonal outcrop housing a café. The café is lit by large windows with recessed frames and there is a terrace above with a balustrade. The gable façade features a tower at its centre capped by a geometric amortisement. This style is also used for the tops of the pilasters and gables on the three façades, as well as for the friezes with angular motifs that underlines the elevation. Originally, there was a performance auditorium, which is no longer there.

The austerity of the façade with its marked vertical thrust is in contrast with the richness of the interior, both in terms of form and colour (frieze, exotic timber panelling, stained glass windows, etc.). The octagonal pillars are transformed into stylised palm trees and the ceiling is animated with moulded profiles. The ceiling reflects the floor with its red and white chequerboard pattern. Note the two entrance areas decorated with stained glass windows, the benches marrying the base of the pilasters and the geometric frieze decorating the upper part of the walls.