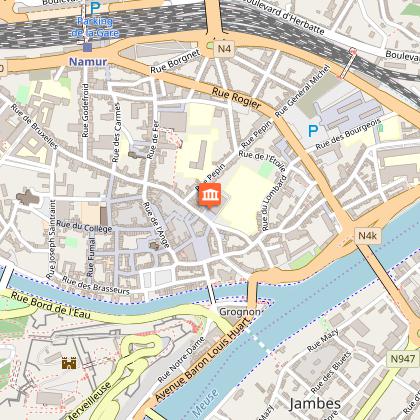 The Namur Royal Theatre is one of the last and most beautiful theatres in Europe to be built in a 19th C. Italian style. It was reconstructed after a fire in 1863 out of sandstone, a material very rare in this region. Its magnificent façade has three levels, the second of which houses the music and comedy statues.

In 1998 began a complete renovation directed by the architect Lanotte, during which he installed the most modern and sophisticated stage techniques known. The main theatre is adorned with velour, blues, greys and golds and spans out luxuriously under a sparkling chandelier. Since 1999, the fresco painted by the French artiste Garouste adorns the ceiling of the Hall.

Thanks to the diversity and quality of the performances, it is now one of the most visited theatres in the Walloon-Brussels Federation.