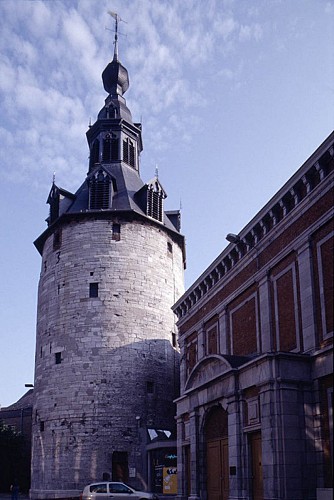 Namur belfry is unusual among belfries in Wallonia in that originally it was the main defensive tower in the town's surrounding wall system. Rebuilt in the 14th century on the site of another tower, the tower of Saint-Jacques – which from the 16th century onwards housed the municipal bell heralding the opening and closing of the town gates – it did not become a belfry until 1746 following a fire in the tower of the church of Saint-Pierre-au-Château, which assumed this role on the site of the citadel.

Built from a solid bonding of limestone according to a circular design, the building lost almost half of its height in 1733 when two levels topped by battlements were removed, leaving a tower just 20 metres in height. Capped by a bell tower with a bulbous spire, it underwent its final modifications in the mid-18th century when it was entrusted with the task of storing the Town's charters and archives. The stone facing still bears traces of fighting from the First World War in places.