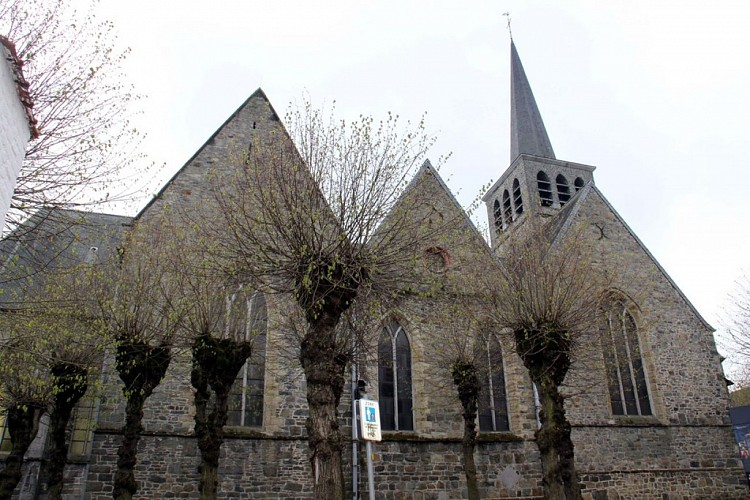 The surprising result of ten centuries of history and fourteen building programmes, St Peter's church, which is built on a Romanesque core, is a building of Gothic style whose unusual design, being nearly as wide as it is long, is the result of the many enlargements carried out over the years, mainly from the 14th to 16th centuries. It owes its consistency to the use of porphyry blocks, with the exception of the chancel, which is built from Tournai stone.

A victim of the bombing that destroyed its Romanesque and Gothic structure of the church irremediably in 1940, as well as virtually all of its furnishings, the building was fully restored between 1950 and 1952 under the direction of the architect Simon Brigode. The church, restored to its original shape, presents a complex design made up of a west porch under a polygonal spire against which are placed two side chapels. This porch leads into a relatively narrow single nave with bays that are amplified by the transversal chapels forming double side aisles. A chancel ending in a pentagonal chevet completes the grouping. The sacristy, adjoining the chancel, dates from the time of the restoration. Despite the damage caused in 1940, the church whose interior architecture was modified more profoundly, has retained a certain number of interesting features. For example, one of the chapels backing on to the tower, the chapel of the Holy Trinity, has two epigraphs: a consecration stone from the first half of the 15th century and details of the income earned by the chapel.