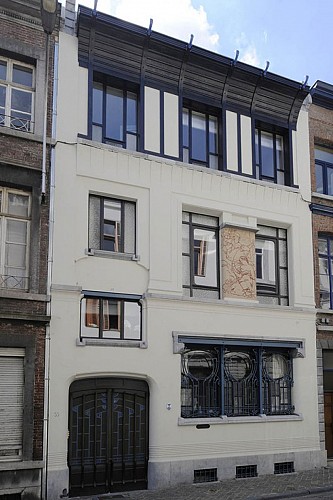 The Comblen house is the personal home of the architect Paul Comblen (1869-1955). Built in 1840 in a neo-Classical style, the house was renovated between 1901 and 1916 by Comblen. It is exceptional for the striking appearance of its façade, its plan and its refined and elegant interior decoration, but especially for its homogeneity that makes it such a coherent work.

The façade has a flat, linear appearance related to the geometry of Art Nouveau. It features rhythmic breaks and asymmetry. On the ground floor, the façade has a wide door and three-pane window fronted by a wrought iron gate. The first floor has two windows linked by a sgraffito created by Emile Jaspar. It includes the three Roman deities of fate, the Parcae, in the process of threading, weaving and cutting the thread of human life.

The rear façade, which is more sober, opens out on to a garden and annexe adorned by an exceptional stained glass fanlight window in which two peacocks face one another.

The interior of the Comblen house is arranged around the central stairwell. On the ground floor is the dining room, smoking room, kitchen and drawing room. The ornamentation is divided between stained glass, stucco, enamels, wall paintings and ironwork.