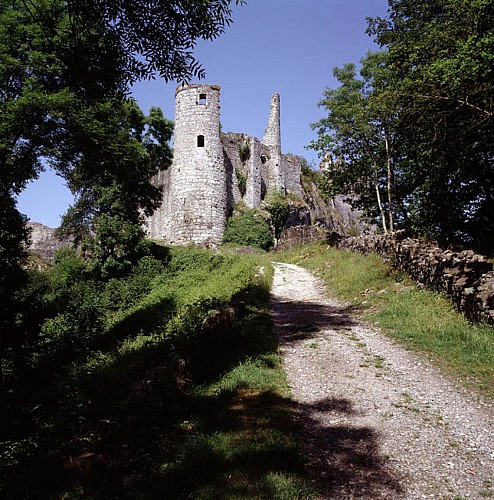 Montaigle castle was built on a limestone outcrop in a bend of the Molignée.  Occupied since the Iron Age (450 BC), the site only came into its own militarily speaking during the Roman era through the establishment of a small military garrison (270 AD). During the late Roman Empire, troops of Germanic origin were garrisoned there in cob and wood huts. This occupation, which was probably only intermittent, lasted until the middle of the 5th century.

Abandoned, the estate was bought at the beginning of the 12th century by Gilles de Berlaymont who built a square tower. Situated at the tip of the rock, this keep was acquired in 1298 by the earl of Namur. A residential section was then built at the summit and defended by a round tower. The outbuildings and well were sheltered in the upper courtyard, while the stable, barns and meadows were located around the lower courtyard. The castle, built according to the principles of Philippe-Auguste (i.e. having a rampart defended by towers placed at equal distances), was developed in the 14th century and modified in the 15th century.  The towers lost their defensive function in favour of more comfortable amenities (latrines, fireplaces, recessed cupboards, staircases, additional floors, cellars, tank, etc.).

The Montaigle site was to retain this unusual appearance until 1554, when the castle was destroyed by fire. It was not until 1965 that the further deterioration of the ruins was halted by consolidation and enhancement works.