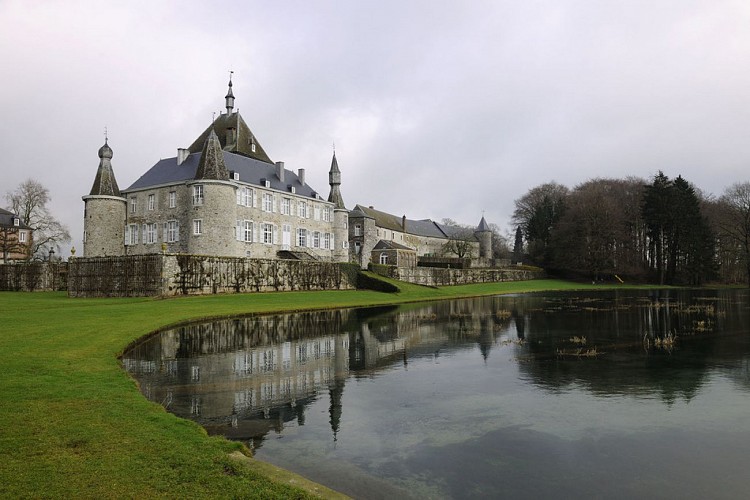 Situated to the south of the village, the château d’Hodoumont was formerly a part of the domain of Goesnes. The castle consists of a seigniorial dwelling and a fortified farm. Today, it is part of wonderful estate parkland featuring lakes linked by a canal adorned by two pyramidions, an arbour, avenues of lime and beech trees. Originally defended by moats, the castle was developed at the beginning of the 17th century from a mediaeval keep. It was converted into a leisure residence at the end of the 18th century

The castle keep is a high and powerful rectangular tower rising to four levels. Still visible is the barrel vaulting of the cellar and ground floor. On the south side, there is also a gatehouse. The window openings date mainly from the 18th century. The roof, which was rebuilt in the 19th century, is supported by a corbelled cornice in quarter-round from the 17th century.

The castle has three circular corner towers topped by octagonal spires with small domes (NW towers) or a polygonal furred roof with a lookout tower (SE tower). The main façade, which is double-fronted, rises to two levels and has five bays. It features windows with window bars and straight lintels. The bâtière slate roof has hipped dormer windows.