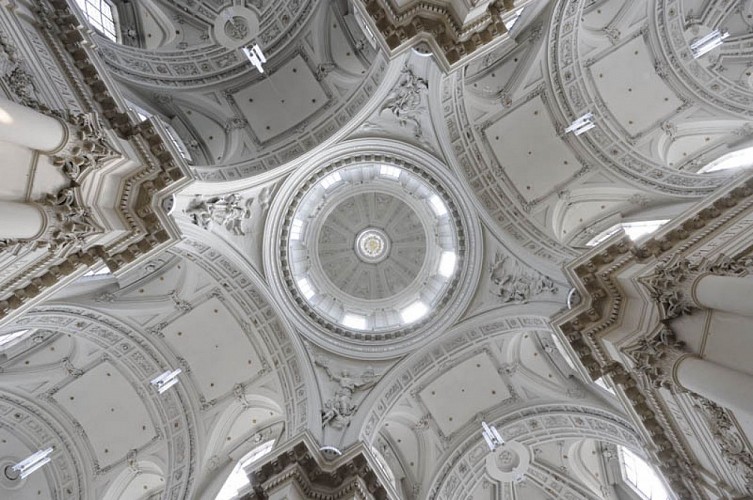 Saint-Aubain cathedral was founded in 1047 by the earl of Namur, Albert II. Originally a collegiate church, it became a cathedral in 1559 on the coronation of Philippe II as king of Spain and when Namur became a cathedral city. The building was then reworked by M.-G. Pisoni and J.-B. Chermanne between 1751 and 1767. Threatened with destruction during the French Revolution, the cathedral was saved and converted into a law court.

The building, made from brick and limestone, consists of three naves with three bays, a transept that is not very prominent, but quite wide, and a chancel with two bays, annexed by low chapels with flat chevet. The façade, typical of the 18th century, is built entirely in Belgian granite in the late Baroque style, tempered by neo-Classicism.

The interior, which is classical, is decorated with stucco, engaged columns, monumental pilasters, Corinthian capitals and cherubim. The roof of the nave is vaulted and decorated with golden stars and plant motifs, the side aisles have small stucco domes and the crossing is topped by a huge dome.

The furnishings that adorn the cathedral are in keeping with the decoration, but most come from other churches in the area (Baroque altar from the Abbey de la Ramée in Jauchelette).