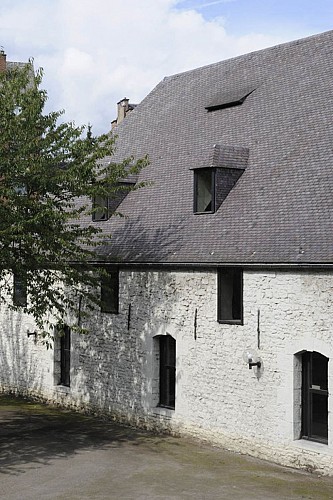 The arsenal is a long stone building with a huge hipped roof in slate. Situated parallel to the Sambre, it is an exceptional example of a moment in history, of the imperatives linked to its original function and of a top-quality refurbishment.

Built in 1692-1693, just after the victorious siege conducted by Louis XIV and based on plans by Vauban, the arsenal was used as a military great hall, which required a structure that could withstand anything. Consequently, the building consists of a sturdy, uniform frame, thick floors on rough-hewn sprung joists and a roof braced in particular by St Andrew crosses. The ground floor houses artillery trains and is located below the quayside of the Sambre. The first level opens to the quayside to which it is linked by a bridge with five stone arches.

The minimalist building was purchased by the Faculties of Notre-Dame de la Paix university in 1977. Converted into a student restaurant, the arsenal also has meeting and reception rooms, amenity blocks, matching floors and staircases, as well as windows and longitudinal indentations. The conversion, directed by the Namur architect, Roger Bastin, was completed in 1982. Note that the restoration of the building also included work on the approaches and surrounds.