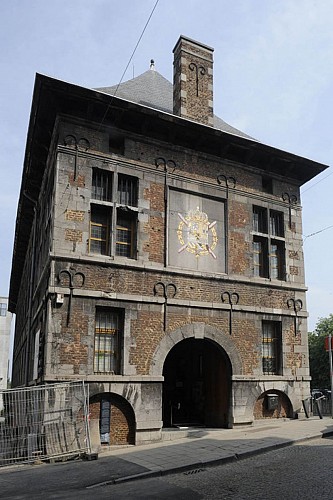 The old al’Chair hall, situated on the left bank of the Sambre, was built between 1588 and 1590 on the orders of Philippe II. The works were directed by the building developers of the earldom, Conrad II of Nuremberg and Bastien Sion. It was an act of propaganda for the Spanish regime after long years of unrest. Namur occupied the role of capital as part of this policy to reconquer the Low Countries. This symbolic function is also reflected above the entrance, where the words "armoiries en grande forme de Sa Majesté mises à ladicte halle" were engraved in 1859 by Jehan David, stonemason.

After housing a Sunday school, warehouses, an arsenal, hospital, temple for the Protestant troops from the Dutch garrison, and a theatre for French troops following the siege of 1746, the old hall became the archaeological museum.

The building is a long rectangular nave in brick and bluestone. Its traditional Mosan architecture bears features from the Renaissance of the end of the 16th century. Today, it is the only public civil building left after the destruction of the Town Hall in 1826. The building also has an exceptional internal staircase with straight flights one on top of the other in stone and timber, which is probably the oldest of its kind.