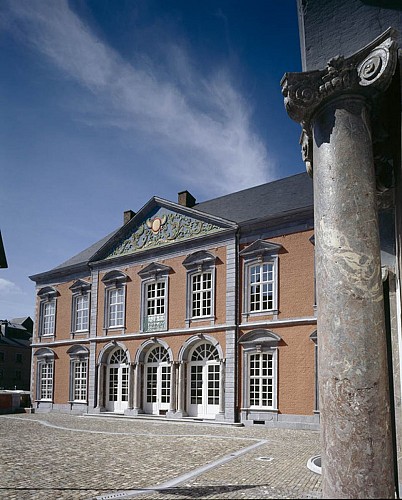 It was at the behest of Pépin II of Herstal and his wife that the abbey was first founded. Following a period of unrest, bishop Walcaud undertook the development of the worship of St Lambert, as well as affirmation of the presence of Liège in this remote area. He established Benedictine monks at the abbey and converted the site into a religious, commercial, industrial and administrative centre of some importance. After the French Revolution, the monks were evicted and the abbey sold. This exceptional site is made up of the abbey church of St Peter and St Paul and the abbey quarters.

The abbey quarters, today called the abbey palace, and the outbuildings belongs today to the State and houses one of its depositories of archives. Designed in the first half of the 18th century in a U-shape, it displays a French influence, which was partly fashionable, but also derived from loyalty to the crown and the king, who was one of the protectors of the abbey. The building encloses a courtyard with gate that has been replaced today by a more modern version. The multiple colours of the gate reflect those of the building in painted brick and local stone and marble, especially on the tympanum of the pediment that dominates the main façade. These colours are repeated inside on the floors, as well as originally on the wrought iron banisters of the main staircase