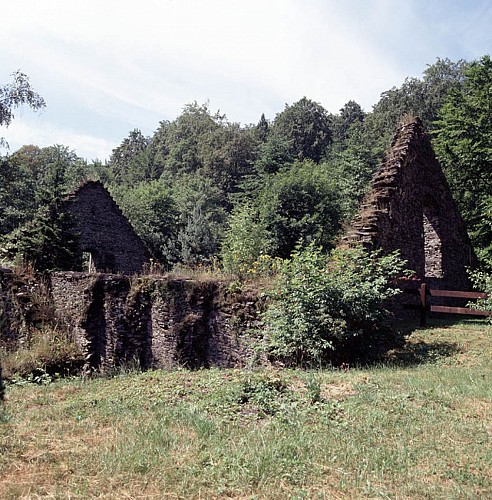 The former forges of Mellier

Mellier-Haut is one of the best preserved proto-industrial steelmaking sites in Wallonia, as well as one of the most representative in the Ardennes dating from the 18th century. The site was chosen because it is located at the crossroads of three essential elements: water, charcoal and minerals. The hydraulic wheels fitted to the Mellier, tributary of the Rulles in the Semois basin, enabled tilt hammers, bellows and ore crushers to operate with ease. The huge massif surrounding the site produced the charcoal required to use the blast furnace and refinery. The minerals themselves were mined in Lorraine (Vance).

The forge location at Mellier is not recent and probably dates from the 17th century. At that time, Pierre Coens, with the support of Anne de Croÿ, duchess of Aerschoot and princess countess of Arenberg, built a blast furnace on the Rulles and two refineries and a foundry at Mellier-Haut and Mellier-Bas. The site then remained in operation until the end of the Dutch period when steelmaking using wood was dying out in the face of the coke-fired blast furnaces in Liège and Charleroi. It was then bought by duke Prosper-Louis d’Arenberg in 1837, more for its forests than for its steelmaking and in 1876, the blast furnace was replaced by a sawmill.