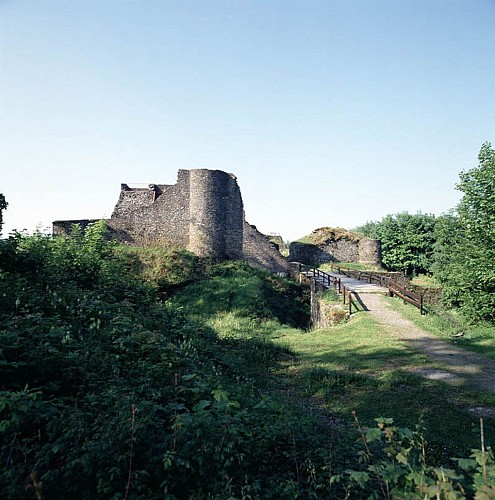 The ruins of the castle

Until the 13th century, Herbeumont was part of a territorial entity of which the heart was occupied by the centre of the old Carolingian tax district, Orgeo, which came under the earldom of Chiny. In 1268, Herbeumont became an autonomous seigniory. This change of status brought with it the wish to build a castle at Herbeumont.

The fortress was built at the end of a shale ridge overlooking the Semois and commanding a narrow crossing linking France and the North. Right from the beginning of the works, the castle was trapezoid in shape, with six towers and a rectangular keep controlling the entrance to the castle. The lower courtyard was surrounded by an earth rampart, while the upper courtyard was protected by a small fortified castle, a moat and a bridge of which half cold be moved.

It was not until the end of the 14th century that the first alterations were made; the southern curtain wall was made thicker and a postern gate installed. At the turn of the 15th and 16th centuries, the castle was modified for artillery and sapping works, adding two living quarters that includes a monumental fireplace decorated with sculptures. In the 17th century, the fortress added stables, furnaces, bakehouse, wells, attics and haylofts, proof of the final occupation of the site until it was abandoned in 1656.