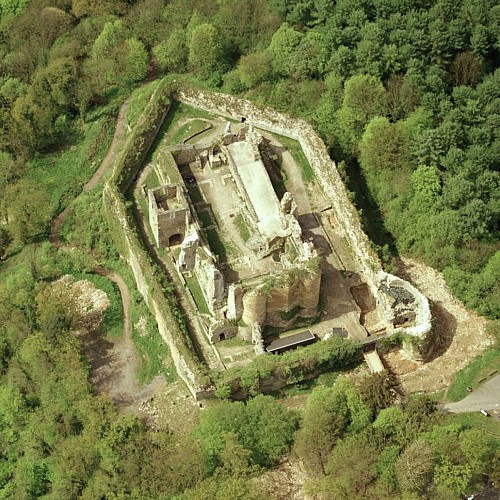 The old château of Franchimont occupies a rocky outcrop at the confluence of three rivers, giving it excellent control of the valleys. The first mentions of this stronghold only date back to the middle of the 12th century, but it was probably built in the previous century to mark the eastern boundary of the young principality of Liège. The older sections of the complex, in the centre, are made up of a castle courtyard flanked by a keep, both built from local sandstone blocks. The south wing of this rectangular structure was to house a seigniorial residence. A fire at the end of the 14th century led to the reworking of the exterior face of the fortress which took on the appearance, as an extension to the old castle keep, of two full towers united by a jaw, thereby forming a thick masonry shield. Still preserved at 20 metres in height, this development proved to be poorly suited to advances in artillery at the end of the Middle Ages. The castle had a wall added in the 16th century, creating an irregular pentagon shape punctuated by five broad circular towers, which also quickly fell out of date. With its role as a fortress lost, the castle nevertheless remained a residence for bishops, refuge or prison until the end of the 18th century when it as finally abandoned during the unrest of the French Revolution.