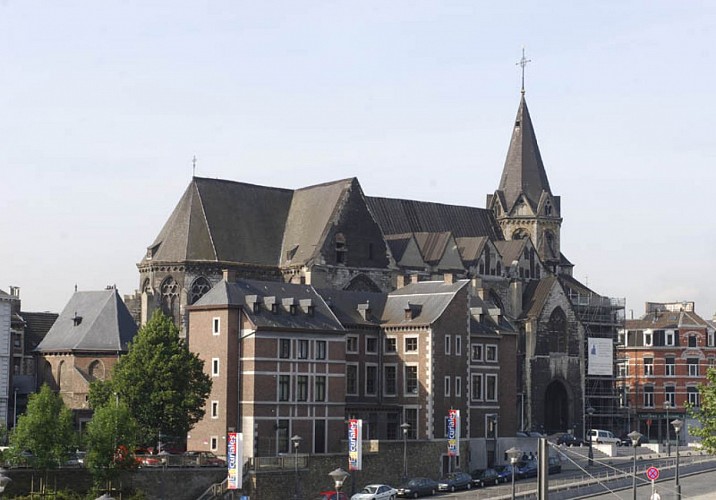 The former collegiate church of Sainte-Croix

The church of Sainte-Croix, the former collegiate church of Liège, is situated on the eastern part of the Publémont and overlooks the centre of the city. It succeeded an Ottonian building dating from the end of the 10th century financed by bishop Notger. The only  remnant of this building is an old coal sandstone wall in the south sacristy. The current building, erected in several phases from the end of the 12th to the 15th century, consists of a Romanesque front section or Westbau topped by an octagonal tower and also with an apse, nave flanked by side aisles, non-prominent transept and a chancel with semicircular apse. The nave is of the "hall" type, since the two side aisles rise to virtually the same height as the main nave. This principle of the hall church was quite unusual in the Mosan region at this time, whereas is very common in Germanic areas. An unusual element are the six chapels in the nave, which are lit by curved triangular windows.

In the 19th century, the building was in a dilapidated state that required a programme of restoration. As part of these works, the east chancel, south façade, window tracery, stained glass windows and front section of the church were all replaced or restored. It was also at this time, more specifically in 1858, that a doorway was added to the Westbau.