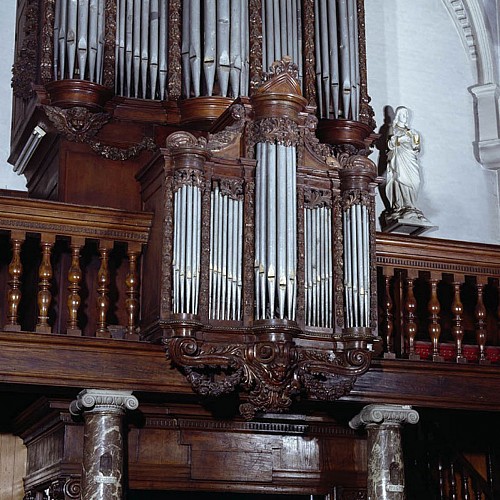 Flône abbey, founded in the 11th century, still has today as part of an architectural group of buildings, extensively rebuilt in the 17th century, a remarkable organ and case. They were the result of an order placed with the Mechelen organ-maker Karel Dillens in the early years of the 18th century.  Working mainly in the north of the country, the work of this maker is of a unique nature in the Mosan region.

The instrument is behind a rood screen dating from the second half of the 17th century, contiguous with the main façade of the church. It is made up of two cases: a large one containing the pipes of the Great Organ and the Echo and its smaller replica, the rear Positive, which is recessed into the balustrade. Built in the same way, these two organ cases feature a central turret and lateral turrets separated by face plates. Acanthus and thistle leaves, plant elements, as well as cherubim make up most of the sculpted decoration of the whole, although this is more abundant on the secondary case. The instrument is distinctive from a technical point of view for the presence of three keyboards and one of the few French-style pedal units preserved in our area. However, the most important feature remains the fact that most of the internal components are still original, albeit soundless today, having come to us without being updated in the taste of the time, something that is frequent in this type of work.