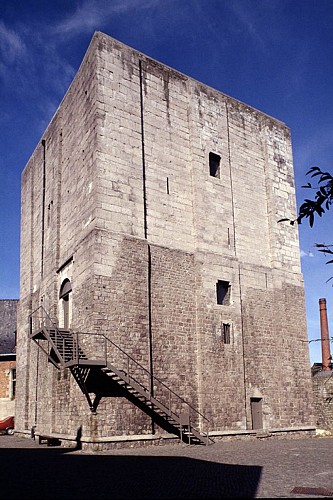 Burbant tower, built by count Hainaut Baudouin IV, known as the Builder, is a castle keep in the Anglo-Norman style of the second half of the 12th century. Built from local stone and faced in the 16th century in bluestone for the upper section, its defensive qualities were based on its sheer mass: sections of wall 14 metres long by 4 metres thick, elevation of at least 20 metres and few windows. The first level was only accessible by a removable platform and a ladder, also needed to reach the second level.

The interior is subdivided into four levels. The blind base housed stores – later becoming a prison – beneath living quarters with fireplaces, a latrine and a chapel. A vault covers the building, which was a first for the period in Hainaut. The upper terrace was once surrounded by battlements. No trace survives of the great Renaissance pavilion in brick, the work of Jacques du Broeucq, which was on top of the keep from 1570.

A raised courtyard surrounded the tower, followed in the 13th century by a lower courtyard, both with circular walls. Independent of this defensive system, the new town of Ath also had defensive walls in the 14th century, bearing at the time of its annexation by France in the second half of the 17th century, the mark of Vauban. During the Dutch period, the keep became an arsenal, then a warehouse before being restored at the turn of the 19th and 20th centuries.