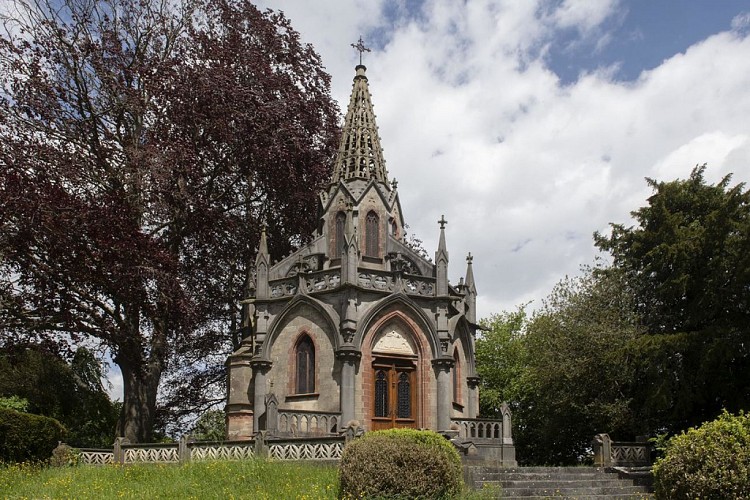 The funeral chapel of Clémentine d’Oultremont

The funeral chapel of Clémentine d’Oultremont occupies the far end of a park in line with the La Berlière estate, owned by the d’Oultremont family, and not far from the municipal cemetery and Saint-Clément hospice, built as part of the same architectural programme. The monument is a good example of the renewal in funereal architecture that took place in the second half of the 19th century, a context that prompted count d’Oultremont to commission a family funeral chapel from the Brussels architect Victor Évrard, requiring the reworking of the surrounds to the cemetery. However, the accidental death of countess Clémentine d’Oultremont caused some elements of the planned programme of works to be modified. The vehicle chosen for the building, erected in 1894-1895 and designed entirely to magnify the personality of the dead countess, is a neo-Gothic octagon topped by a second level under an openwork spire and enhanced by friezes and frames in red sandstone. The decorative opulence of the complex adorns both the funeral room in the basement and the chapel with the association of the stone and the red sandstone, coloured mosaics and, originally, the décor painted on canvas mounted in the dome. The choice of style is by no means bland, with neo-Gothic being associated in this period with traditional values, plus overtones of the memorial built in the memory of Leopold I in the grounds at Laeken, thus giving the whole project additional depth.