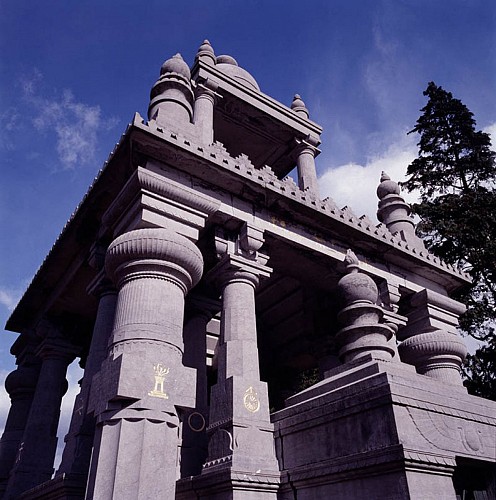 The mausoleum of the counts Goblet d’Alviella

The mausoleum of the counts Goblet d’Alviella, built in the middle of the new cemetery at Court-Saint-Étienne, is unique in Wallonia for more than one reason. It results from a commission given in 1885 by Eugène Goblet d’Alviella to the Brussels architect Adolphe Samyn. The personality of the client, a freemason and liberal thinker, profoundly influenced the choices of the architect and the future of the cemetery because the monument determined the general layout and access roads linked directly to the nearby property of the Goblet counts. As a result, the mausoleum, in the fashion of the Indian models that it adopts, is very different from the funereal types and styles of the end of the 19th century, which usually reveal the social context or beliefs of the deceased.

The work, quadrangular in shape, has an elevation on two levels, typical of ancient Indian tombs. These levels are framed by massive columns and topped by a terraced roof supporting a domed aedicule. Apart from this unusual appearance, the monument is filled with symbols taken from various religions and philosophies, with some highlighting the cyclical side of the weather and others calling up notions such as rebirth and resurrection. The ornaments of various influences are explained by quotes or maxims of a philosophical nature. This funeral monument is therefore very clearly a manifesto and through its syncretism, promotes a notion of tolerance close to the client's heart.