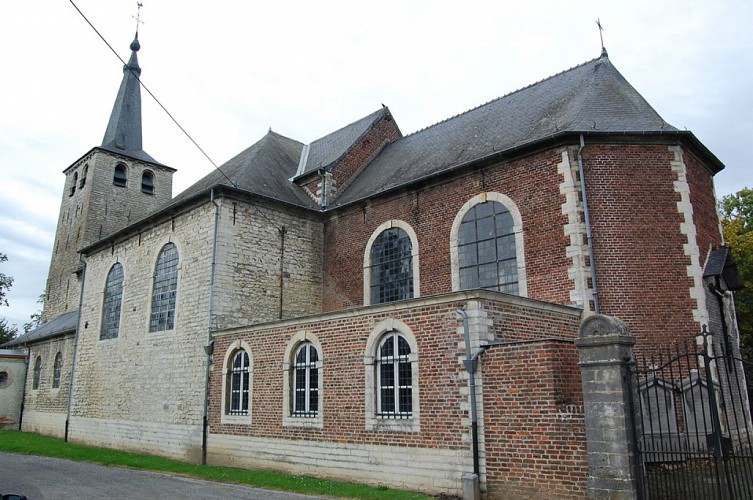 The church of Saint-Barthélemy

Built in two phases, the church of Saint Barthélemy dates back to the 11th and 12th centuries for its Romanesque section, which consists of a square tower and a nave with four bays. The side aisles and two Louis XVI doors were built on old foundations in the 18th century. Also in the second half of the 18th century, a chancel with polygonal chevet was rebuilt in stone against this section preceded by two bays in brick and white stone. A prominent transept completes the design. The interior appearance also dates from this period, as in part, the sacristy of the 18th and 19th centuries. Finally, a baptistery was added in the second half of the 19th century. The furnishing include in particular several tombstones dating from the 15th to the 18th centuries, Gothic foundations from the 16th century and a Baroque pulpit from the mid-17th century. Partially enclosed, the old cemetery still abuts part of the church, restored in 1970-71 under the aegis of architect F. Jacques and L.-F. Genicot.

Positioned on a platform opposite the choir, the church organ at face Saint Barthélemy was entirely rebuilt in 1831 by the organ-maker Charles-Louis Rifflart. At the same time, the 18th-century organ case also underwent a few modifications. As a result, a console decorated with a music trophy, originally placed to the rear, was repositioned in front of the balustrade of the organ platform. As part of this operation, a number of sculptural elements that had become hidden were also moved to either side of the console. The rest of the decoration is made up mainly of a series of scrolls enclosing the central turret and face plates.