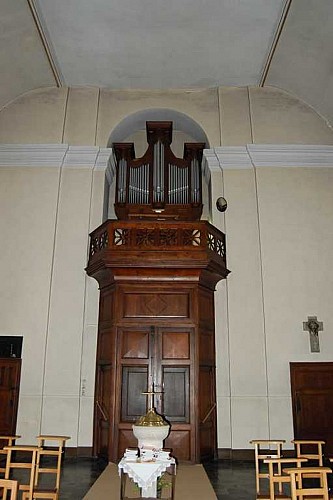 The organ of St Martin's church

Built in brick and white stone at the end of the 18th century by the architect Jean-François Wincqz, St Martin's church has an emphatic geometric façade from the centre of which rises a tower with a door capped with a cartouche and oval oculus window. The broad nave ends in a rectangular chancel that appears to overlook a mound delineated by the wall of the cemetery bordering the church on one side. The furnishings consist mainly of a high altar that comes from the Abbey de la Ramée and a pulpit dating from the mid-18th century.

The listed organ, built in 1864, is the work of Polycarpe-Florentin Cappuyns-Keulemans, organ-makers from Mechelen. Installed on the platform opposite the chancel, it was first restored at the beginning of the 20th century, with further work carried out in the 1990s. The organ features a front of dummy pipes made up of three turrets flanking the face plates.