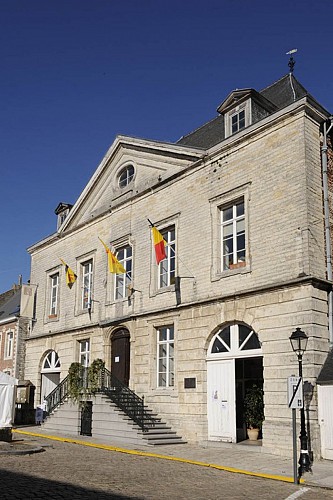 The old Town Hall, currently housing cultural associations and services, was not the first building in Jodoigne to occupy this function. A communal house was reported to be in poor condition in the second half of the 17th century. The current classic style building, known generally as the Hôtel des Libertés, dates from the first half of the 18th century, as shown on two date stones for 1733 and 1734. It came into being, in the same way as Comté castle or Pastur castle, situated in Rue du Château, as the result of a commission from the count of Romrée to the architect Verreucken, after the fire that occurred in the Grand-Place in 1710. The façade, as is the case with numerous other local buildings, is in Gobertange stone and the old Town Hall is accessed by steps with wrought iron railings. The main façade features two levels of five bays, clearly differentiated by the special treatment of the outer surface, sometimes with bosses, sometimes bonded. A triangular pediment with oval window stands out from the high roof. The building was restored by J. Clément between the two world wars.