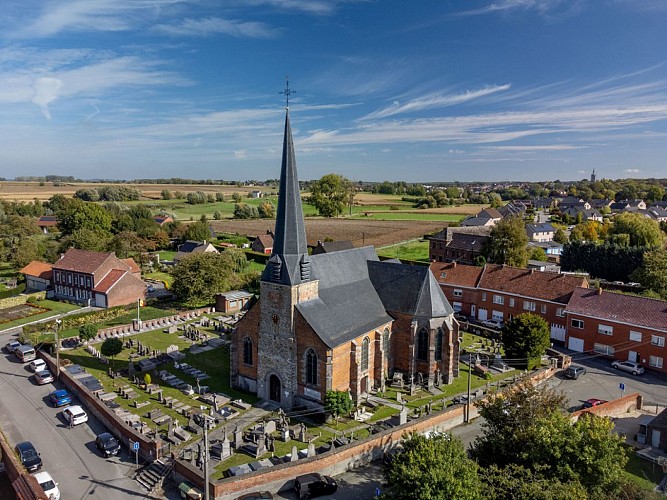 The church of Saint-Martin de Marcq

The church of Saint-Martin de Marcq is a Gothic-style building with an 11th-century Romanesque tower. Built in the middle of the 16th century, the church is made up of a nave, two side aisles extending from the tower and two prominent transversal chapels. The presence of these chapels gives the illusion of a transept. The chancel, which came later and was built at the beginning of the 18th century, has a semi-hexagonal chevet. The rib vaulting of the nave and chancel date from the same period. The church was restored in the second half of the 19th century, a time when a neo-Romanesque axial entrance was added. The bell tower in the Roman tower was restored (2007) as part of a programme aimed at consolidating the roof structure, while at the same time repairing the roof.

The church furnishings include timber facings in the chancel, the pulpit and organ, both dating from the 18th century. The organ, built in 1772, is the work of Pierre I Van Peteghem from Ghent, founder of one of the most important dynasties of organ-builders in Flanders. this is the best preserved example of his work in Wallonia, at least in its original condition. The organ case dominates the Renaissance-style platform by way of an enlarged base and it has an imitation positive or second set of pipes, leaving one to believe - wrongly - that the instrument has two sound levels. The organ only has one keyboard and no pedals. A central turret under a statue of St Martin on horseback, patron saint of the church, enhance the organ.  All of the ornamentation, with the exception of certain elements, is in the Rocaille style.