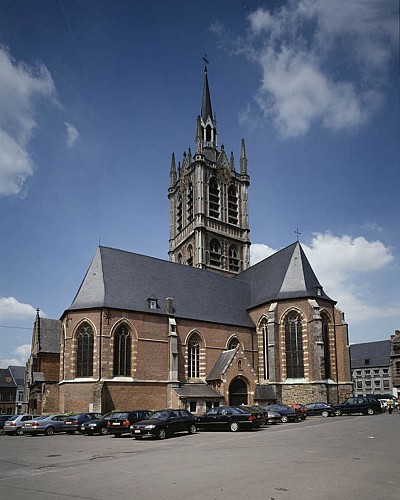 The church of St Nicolas-de-Myre

The church of St Nicolas of Enghien is a Gothic-style building dating from the 14th and 16th centuries. A church was built from 1328 to the end of the 14th century on the site of a primitive oratory mentioned from the 12th century and placed under the patronage of St Nicolas. During the 15th century, the transept, tower, nave and its side aisles, as well as the elevation of the chancel were all rebuilt. The church was then totally roofed in crossed barrel vaulting. During the 17th century, and at the request of duchess de Croÿ, the south arm of the transept was developed into a chapel in the Renaissance style, dedicated to Our Lady of the Rosary. The 18th century saw the remodelling in neo-Gothic style of the tower (architect: J. Dumont) and the west façade (architects: Verhaegen and Nève).

Designed in the shape of an irregular Latin cross, the church is made up of a nave, side aisles, prominent transept, chancel, annexes and the cross tower. The nave has four bays and is flanked by three side aisles (one to the north and two to the south). The chapels of St Anne and the baptismal fonts were added to the second south side aisle. The north side aisle has a Brabançon Gothic porch built between 1444 and 1459 by Jehan Inglebin. The chancel with three bays ends in a chevet with five walls. To the south-east has been added a third chapel dedicated to Our Lady of Messines (15th century).

Above the crossing of the transept is a neo-Gothic tower made up of a stack of two levels of sound openings. The summit, with its octagonal campanile, is flanked by corner turrets softened with pinnacles. Note the stained glass windows, some of which were created in the 20th century by Max Ingrand, as well as the baptismal fonts and pulpit.