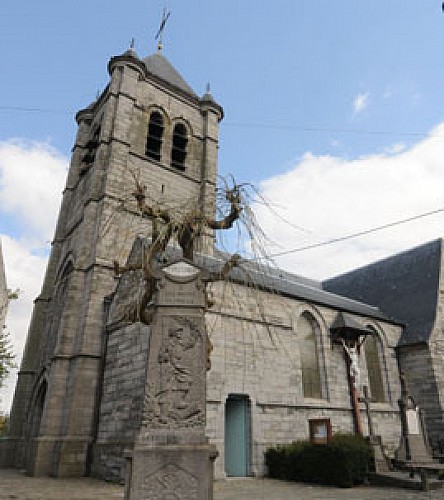 The church of Saint-Vaast d’Évregnies was built mainly in the 15th and 16th centuries. The Gothic Brabançon and Scaldian building (alternating between brick and stone) also features two Romanesque walls from the 11th century. Burnt down in 1693 during the wars of the League of Augsburg, the church lost its barrel vault panelling, as well as the gables above the south side aisle. A little restoration has enabled the building to retain its disparate character.

The tower on the façade only juts out a little and rests on two quatrefoil columns rising from the nave. Built from Tournai stone and brick, the tower consists of five levels marked by dripstone cordons. There is a Gothic arched doorway with softened archivolt, a high window beneath an archivolt and finally geminated sound holes with chamfered profile and archivolt. The tower is topped by a furred pyramidal spire and is flanked to the north by a polygonal stair turret.

The Romanesque nave has Gothic windows. It has four bays and is flanked by a side aisle and chapel to the south. The side aisle, with a barrel vault ceiling, is below an asymmetrical bâtière roof. The chapel, dedicated to St Vaast, has a furred bâtière roof.

The Gothic chancel ends in an apse with five walls and five high windows. It has a vaulted ceiling with stone ridges descending to prismatic culs-de-lampe and is flanked by an annexe and sacristy in brick.