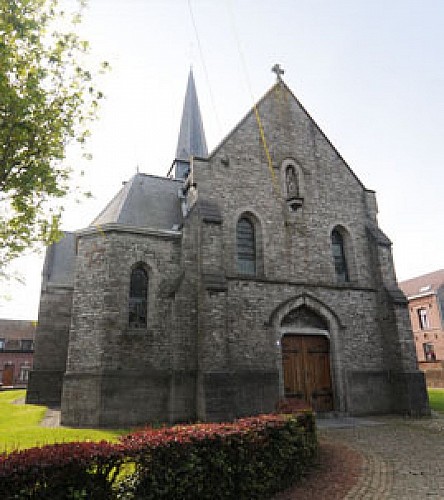 Saint-Amand church was built in Tournai stone in the 13th or 14th century. It was rebuilt in the 15th century, enlarged between 1772 and 1774, and restored in 1910 by C. Sonneville, who created the neo-Gothic façade.

The church is made up of an entrance flanked by a circular stair turret and polygonal annexe. The nave has two bays, of which only the first has side aisles leading off. These side aisles were redeveloped in 1910 at the same time as the façade. The nave has six columns in Tournai stone. This is the oldest part of the church. The aisle has a 20th-century flat timber roof from. There is a double transept extending more to the west. The chancel with chevet with five walls is rib vaulted with brick segments. The ridges are softened by prismatic culs de lampe adorned with angels' heads. The chancel is adjoined to the south by a neo-Gothic sacristy.

Noteworthy among the furnishing are the funeral slabs, stained glass windows and baptismal fonts.