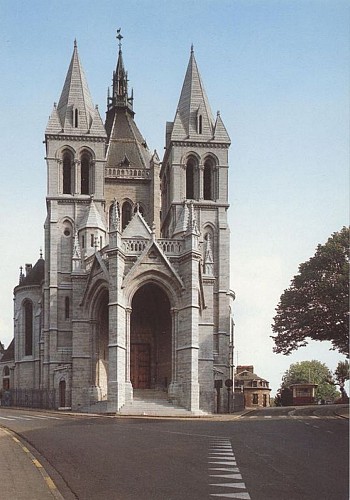 Notre-Dame-de-Bon-Secours basilica is a neo-Gothic church built between 1885 and 1895 by the architect F. Baeckelmans on the site of a place of worship used since the 16th century. Originally, there was a statue of the Virgin, sheltered under an oak tree between the forests of Condé and Blaton. But in 1636, an initial chapel was built there and this was enlarged on many occasions. It was in 1910 that the church gained its status as a basilica.

The building is constructed on a central plan in Tournai stone. The octagonal centre is flanked by a corolla of chapels with a massive light tower above.

The façade features a jutting hexagonal porch with three large Gothic windows under a triangular pediment. Behind the porch, two square section towers rise five levels delineated by dripstone cordons. Above the towers is a square spire enclosed by corner pinnacles.

Note the ceramics by Max van der Linden and the oak statue of the Virgin, formerly polychromatic, dominating the chancel and dating from the beginning of the 16th century.