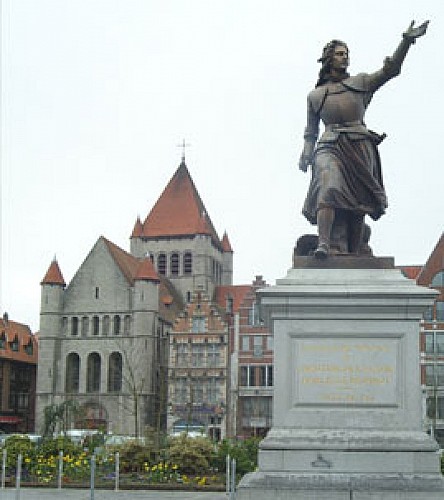 Saint-Quentin church is a Romanesque and transitional building. The Romanesque church, built in around 1200, was cruciform and today there still remain the nave, transept and transition crossing tower, two chapels and the upper part of the chancel. In the 13th century, the arches of the chevet were added, along with the arms of the transept and other chapels. The lower part of the chancel was rebuilt in the 15th century, ringed by an ambulatory and three chapels. The main restoration was carried out after the bombing in the Second World War. This work was completed in 1968.

The Romanesque façade, flanked by two corner turrets, is made up of three levels topped by a triangular gable. The first level features a neo-Romanesque door, the second three large Gothic windows ahead of a way through and the third features alternating blind and open Roman windows. Above the crossing is a squat tower topped by a pyramidal spire. The tower is enclosed by four octagonal corner turrets with pinnacles. The nave rises to three levels with five bays. The higher it goes, the larger the windows and more light enters the building. The nave has a flat wooden ceiling.

The prominent transept with two bays has two windows, above which is a large round window. The arms of the transept have a vaulted ceiling. The chancel has one bay and seven walls. It is vaulted in white stone and surrounded by a late Gothic Tournai ambulatory with large windows under an archivolt. This is crowned by a ridged vault in Tournai stone. Note the polychrome vaults in the axial chapel dating from the 15th century depicting the four evangelists accompanied by angels, as well as the marble wall separating the chancel from the ambulatory.