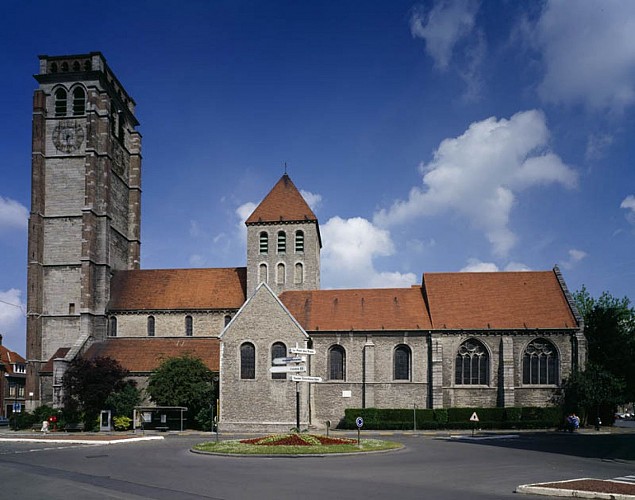 The church of Saint-Brice was built between the end of the 12th century and the 15th century in Romanesque and Gothic styles to replace a basilica-shaped pre-Romanesque church on the same site. The building was seriously damaged by bombing in 1940 and rebuilt between 1942 and 1945 by the architect S. Brigode. The core of the Romanesque tower at the front was incorporated into a building from the end of the 15th century. Made up of seven levels, the slender tower was used as a belfry by the people living on the right bank of the Scheldt. In 1821, a final level was added, made from brick.

The Romanesque nave has four bays and three levels. It is flanked by side aisles rebuilt in the 20th century. The nave and side aisles have a barrel vaulted ceiling.

The croisillions of the transept, as well as the final bays of the chancel act as chapels with triangular gables.

Above the crossing is a lantern tower (the base is Romanesque and the top dates from the 20th century) on three levels and with a pyramidal roof. The chancel with two bays is designed as a "hallekerk", or hall-church. Deepened by two bays in the 15th century, it ends in a triple chevet with triangular gables. The raised chancel accesses the crypt, which dates from the 12th century.

The church has an old-style flat tiled roof dating from the 20th century.