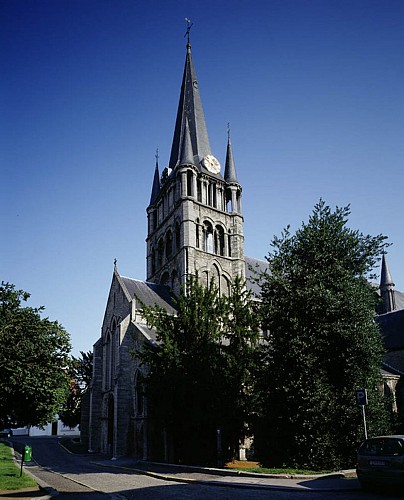 The church of Saint-Jacques is second in importance after Tournai cathedral. It forms part, along with other parish churches, of a core of religious buildings from the 12th and 13th centuries that are exceptionally well preserved.

Its appearance, which appears complex at first glance, shows the various stages that led the construction to its current state: the Romanesque church, which has largely disappeared, the larger building and Gothic chancel. Of the first phase of the church, dating from the second half of the 12th century, all that remains in the square tower raised at the end of the century. This tower originally occupied the crossing, where the transept joins the nave. So the nave used to extend beyond the current porch, remodelled in the 15th and 18th centuries and rebuilt in the 19th century.

At the beginning of the 13th century, it was decided to rebuild the church. As a result, the former crossing tower, recently enhanced by two levels and ending in an octagonal spire framed by four angular spires, became a porch tower and a new nave was added to the east, as well as a low transept and chancel that has since disappeared. This nave and the transept that goes with it are fine examples of a local Gothic style that retains numerous Romanesque elements.

A barrel vault ceiling, restored in the 19th century as part of the original roof structure, adorns the central nave. The current chancel dates from the second half of the 14th century and, with the side chapels, illuminate the nave with its high windows. The walls and arches of these chapels are decorated with 15th-century wall paintings depicting, among others, angel musicians. The stained glass windows are in the process of being restored (2011).

Not the typical Scaldian Gothic capitals that are decorated with palm leaves that roll up on themselves.