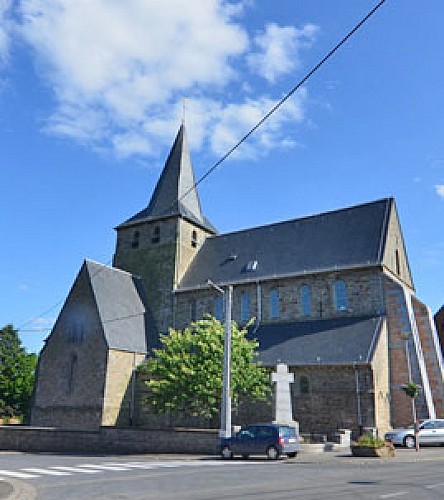 The church of Notre-Dame de Chaussée-Notre-Dame-Louvignies is in early Romanesque and Gothic style. Built along an old Romanesque line, the church is dedicated to the Virgin. It was built from local sandstone in the 13th century (1250). During the most recent restoration programme, the roof structure was restored and dated by dendrochronology to 1267.

The façade is enclosed by two buttresses marked "1776". Above the east entrance is an arch with columns topped by crocket capitals. The upper level features an arcade with lancets into which two twin windows of similar shape have been inserted.

Above the crossing of the transept and chancel is a tower dating from the first half of the 13th century. This tower is topped by an octagonal slate spire. The building's roof is in five sections.

The nave has three broad bays and six lancet windows. Next to it are two side aisles lit by small Gothic arched windows (19th century). The prominent transept has just one bay. The south arm was rebuilt in the 16th century.

Of note among the furnishings is the use of local stone (baptismal fonts, floor, stoup, tombstones, etc.), as well as the stalls, main altar in the chancel, which comes from the abbey of Cambron-Casteau, the pulpit and two confessionals in the style of Louis XV.