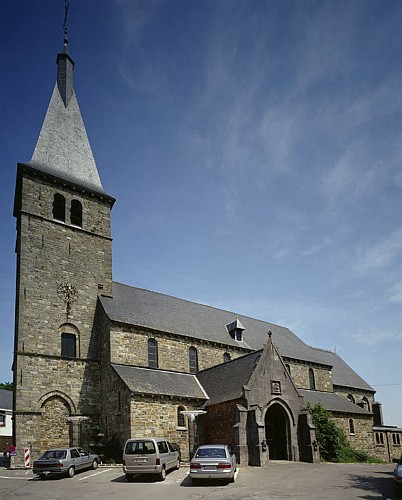 St Martin's church is a Romanesque and Gothic structure built in the 12th and 13th centuries using blond sandstone. The 19th and 20th centuries saw various restoration programmes on the building, the last of which was completed in 1969.

The square porch tower is characteristic of the period between Romanesque and Gothic. The tower has very few openings. In particular, some crown arches have been filled in to the north and south. The ground floor ceiling was modified at the end of the 13th century into rib vaulting. In the 18th century, when the organ case was installed, a stair turret was also added. The Romanesque nave dates from the second half of the 12th century and is made of six spans with Gothic arches and quadrangular pillars. There is a wood ceiling – a copy of the original – and the masonry is still of the period. The side aisles were restored in the 19th century based on remains still in place, in particular the profiled modillions of the cornice.

The chancel with flat chevet in the Gothic style is lower than the nave. It consists of three bays and both its gutter-bearing walls and the chevet are lit by three crown arch windows.

In the second half of the 16th century, a side porch characteristic of the Gothic period was added to the south side aisle. The lowered Gothic arch door is framed by an archivolt. Sculpted lions were restored on each side in the 20th century. The church roof is of slate bâtière construction with a stone modillion cornice. Some items of the church furnishings are well worth seeing: the stalls, pulpit, a reredos in white French stone featuring the legend of St Hubert, as well as the organ.