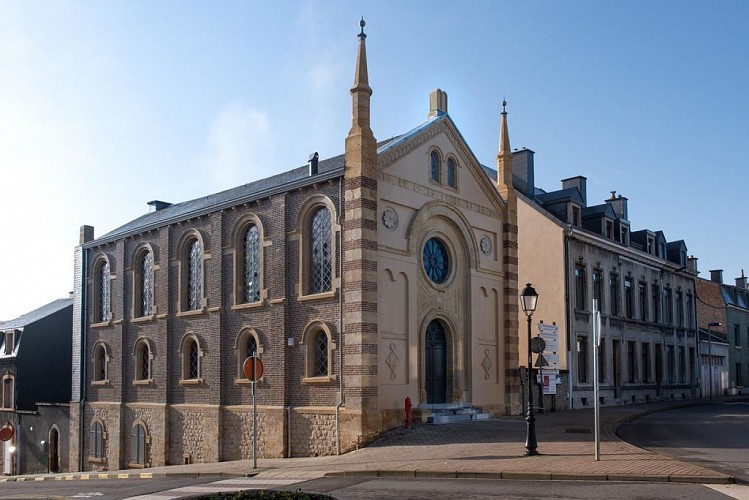 A French Jewish community from Lorraine commissioned the construction between 1863 and 1865 of a synagogue with Romano-Byzantine influences based on plans by the architect A. Jamot. This makes Arlon synagogue the oldest building of the Jewish faith in Belgium. The building has three naves in limestone and brick and a bâtière roof. A half-buried basement made from limestone blocks compensates for the slope in the land. The façade is polychromatic and adorned with pilasters, friezes and rosettes. The axial entrance is through an arched door made monumental by a colossal arch below a rose window. Use of the synagogue is symbolised by the presence of two twin windows representing the Tables of the Law, as well as their depiction on the ridge pole of the roof. The side walls are made up of five bays with pilasters. Two levels of arched windows are visible.

The nave has a barrel vaulted ceiling highlighted by raised ribs. Two balconies designed to accommodate the women during ceremonies extend down the side walls and are supported by pillars. The semi-circular apse houses the neo-Classical tabernacle with the holy arch and the Torah. During the Second World War, the synagogue was used as a storage place for fodder.

Note the floor slabs and metal polygonal lights that confirm the orientalised influence of the building, as well as the Jewish cemetery. Inaugurated in 1856, it is considered as the oldest Jewish necropolis in Belgium.